Fear is the Thief of Humanity’s Light 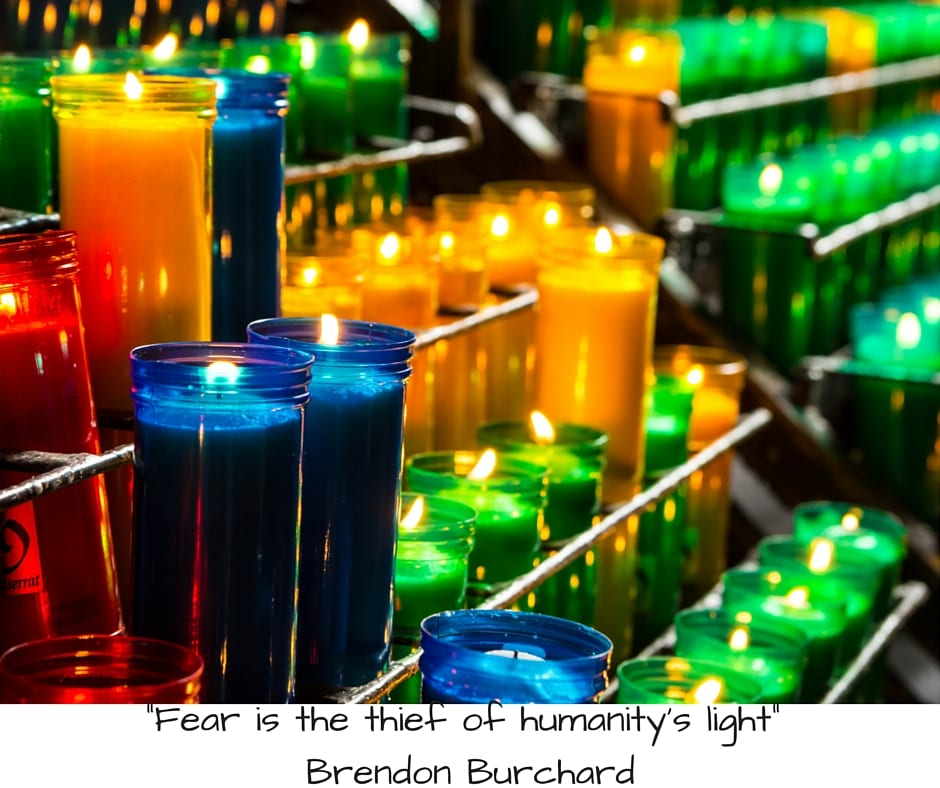 There are times when something so tragic happens, such as a mass shooting, that it stains your soul.  People will talk for days to try and understand why it happened, and what can be done to prevent it from happening again.  They will dig up every nuance of the person who did the unspeakable to try and say, “this thing here is the reason”.  It will create conversations, and arguments over what law could be passed that would prevent it from happening again.  You do this because, you want to validate that you are not in danger of also becoming a monster.

The experts will talk for days about what causes someone to become so radical that they will take a strangers life.  Whether they walk into a movie theater and start shooting, or they drive a car into a crowd of people, or they bomb a concert – it is always what could cause a person to do this?  The families and friends will wonder how could I miss that someone I thought I  knew, could have the motivation to do something so tragic?

Fear can cause a person to become unbalanced, and turn into a monster.  It is the ultimate destination of misplaced and out of control fear.  This cage of fear smothers a persons humanity, until they strike out at others like a wild beast that has been cornered.  It begins in small ways.  You may walk by someone being bullied, and you hurry past looking away so they don’t see that you are witnessing it.  You don’t want to become involved.

In todays current reality, we see people hoarding supplies.  Empty shelves in the grocery store.  Business’s closing their doors either out of concern of the spreading virus or by government mandate.  This creates loss of income in those who can afford it the least.  Fear will keep you from asking others if they need anything.  Fear will make you feel that if you share or look out for others, that you will end up not having enough for yourself.

In everyday life, you may listen to family members that practice mental cruelty to another family member, with unmerciful teasing and taunting and belittling.  You could become warped in your beliefs that “this is just the way life is”.  You could soon find yourself being attracted to the hateful speech of others.  You could begin to identify with being a victim of social injustice.

Step by step, when you walk in the path where you are blaming others for your current troubles, you begin the journey of becoming what you hate.  If you blame others for your lack of success or misfortune, it is a step in the wrong direction.  If you allow your fear to make up stories in your head, it can become another step by step to your losing your humanity.  Most people don’t just walk off the edge of sanity in one day.  It starts by paying attention to the hate and lies being told by radical groups.  Then slowly step by step, you could become another damaged life.  You could become another lost soul.

Fear can weasel into your life in softer ways.  It is your fears that hold you back from honest communications.  At work, at home, and at school relationships are lost, because you don’t communicate with each other.  You are afraid to be hurt, to be misunderstood, to be unloved, based on made up stories in your head.  So you don’t open up your heart and say what you feel inside.

Instead you make up stories as to how the other person will react, and you close yourself off.  We fence ourselves off, and we lose.  Despite our efforts to protect yourself, you end up with a broken heart.  No relationship can survive if you don’t learn to have heartfelt open communication, as reflected by the high divorce rates and abandoned friendships.

In my early 30’s I was laid off from work and my particular industry in Southern California had been hit hard with layoffs.  No one was hiring and my family ended up moving into my parents basement while I looked for work out of state.  During this time my Aunt visited from Oregon, and the three of us went to lunch on the Santa Cruz Boardwalk with her.  During lunch we had a conversation around what was happening, and I expressed how hurt I was because of something my mom said.  I don’t remember what she said, just that it triggered the feeling in my that I was never “good enough” for my mom.  With my aunt acting as a referee, my mom heard me for the first time.  This feeling came from a time when I was a child.  I had swept the kitchen floor and after I was done, she took the broom from me and showed me all of the places I had missed.  From that moment on, I always felt I could not please her.  That she would always find fault.  She had no idea I had ever felt that way.  We were able to heal a wound that had festered inside of me for years.

Fear can only rule your mind when you let it.  You have the ability to challenge these fears when they come up inside your head.  You can question where this belief is really coming from.  You can ask it, “are you 100% sure that this is the truth?”  You can master the fear with courage.  It is only when you are living a life of courage, that you can truly be free.

Fear is not always a bad thing.  You might be walking home one night.  You might consider taking a short cut on a path through the trees.  After the first few steps, the hair on the back of your head starts standing up and your mind is shouting, turn around, this isn’t safe.  So you turn around and walk down the lighted street to go home.  The next day we hear that someone was robbed taking that shortcut.  The fear you felt saved you.

Most of the time however, fear is not your friend.  It robs you of your freedom.  It claims to keep you safe, but instead it locks you in a cage.  It robs you of a fully lived life.  You never attempt to live out your dreams, because you are afraid of failing.  I read a story in the news about a woman who was robbed at a Walmart in Oregon.  A man stole her bicycle and she was yelling for someone to help her.  This cowboy had his horse in the horse trailer, so he backed the horse out, and took off after the thief.  He actually caught up to him, used his rope to lasso him, and dragged him back to Walmart and the police.  The cowboy was a champion bull rider and has now been named “The Lone Ranger” and “the John Wayne of Southern Oregon”.  He says he was just trying to do the right thing.  After turning the thief over, he put his horse back into the trailer and went home to take care of his cattle.

This is a man who has faced his fear down.  There are far more people in the world like him. People that help others.  People who don’t turn away when they see injustice.  People who believe in doing the right thing, and who demonstrate those beliefs with actions.  There are even more who want to follow that example.  You have that ability right now, today.  To knock on a neighbors door and make sure they have want they need to shelter in place.  To call your friends and make sure they have what they need.  To give out of your own abundance to help others in some way.

If you light your candle, and stand in the darkness, you lend your courage to others to do the same.  Each person can light their candle from the flame you are shining out into the darkness.  If you each take a stand for living a more fearless life, the world will shift.  This is what living your purpose and living your dreams is all about.  You don’t hoard your light under a basket, but rather you shine your light out into the world.  I believe that living this kind of life, keeps that monster from being created in the first place.