We Don’t Have To Agree, In Order To Be Kind To One Another 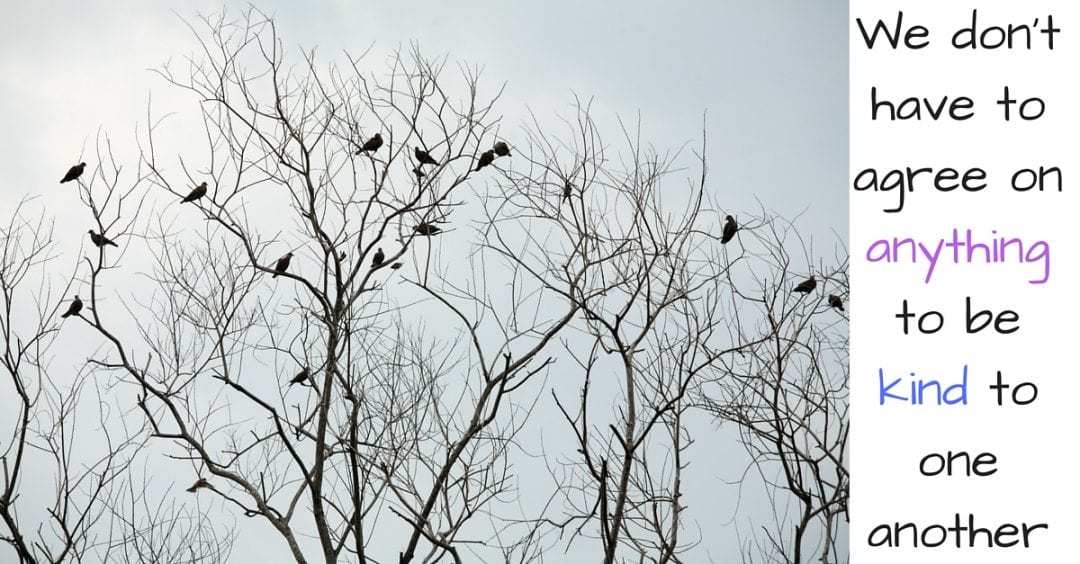 It is interesting how as humans we tend to want everyone to think just like we do.  In my family, we like to have “conversations”.  When my grandmother was alive it was so interesting to listen to all of the adults after dinner.  She would usually introduce a topic that she knew some of my aunts or uncles wouldn’t agree on.  Then she would come at that topic in several different directions.  She was a researcher, and in her past had taught school in a country school with all the grades together.  She was really smart and if you were going to come at another viewpoint than her, you had better know your stuff.  So I grew up with it being normal to have conversations with others about conflicting viewpoints.  No one was ever judged as wrong, just different.

It is the mark of an educated mind to be able to entertain a thought without accepting it.

So raising my kids, we would also talk about things that we don’t agree with each other on.  My youngest son and I are on opposite sides of the political spectrum.  We all give each other a hard time, but it is with a joke encapsulating it.  No name calling or escalating into arguments.  Because whatever your viewpoint is about something, if you have an open mind, you can find good points in almost any viewpoint that you can agree on.

He is pro guns and very conservative.   I am the “hippy” who still believes that someday we will really be a global civilization and get along.  What is so interesting is that we both have examples of the others beliefs that we can poke fun at, and we have lots of stuff that we are totally on the same page about.  The reason it works for us, is that we realize that as we grow and shift and transform, sometimes those viewpoints that we have held to for years, also change.  What you felt strongly about at 5 yrs old; at 15 yrs old; at 25 yrs old; at 50 yrs old will not be the same things.  Be a freethinker.

Freethinkers are those who are willing to use their minds without prejudice and without fearing to understand things that clash with their own customs, privileges, or beliefs.  This state of mind is not common, but it is essential for right thinking.  Where is it absent, discussion is apt to become worse than useless.

You don’t have to compromise your convictions to be kind to one another.  We need to stop buying into being in fear of others.  People are not meant to be matching bookends to us.  It really doesn’t matter what your political viewpoint is; what your skin color is; what your culture is; what sexual orientation that you identify with.  It doesn’t matter what your religion is.  If we were all to sit down and fill out a survey about any of the important things in life, like being able to feed your family and have a safe place for them to live.  About medical care for everyone.  About equality, whether it is for racial relations or work wages.  I think that the survey would reflect we could all agree on those things being important.  We might differ in how we think it should happen, but those small differences should never escalate into hatred and violence.

Have you ever become best friends with someone that you didn’t agree with?  It is possible to love someone that you totally disagree with about certain issues.  My husband and I have been married for almost 44 years . Our politics are on the opposite side of the spectrums, and our religious views are not the same.  But in comparison to how much we had in common, those things don’t interfere with our loving each other.  Even though we are in different political parties, I can acknowledge the good in his viewpoints.  We agree that we can have our own religious views and still love one another.  I think it is part of what has made us successful where so many others failed. We are best friends ,even though we don’t have the same beliefs about every single subject.  The more we can see the humanity in one another, the harder it is to hate someone.  No one ever has to be judged wrong because they don’t agree with every word out your mouth.

Our culture has accepted two huge lies.  The first is that if you disagree with someone’s lifestyle, you must fear or hate them.  The second is that to love someone means you agree with everything they believe or do.  Both are nonsense.  You don’t have to compromise convictions to be compassionate.

We don’t know what is going on in someone else’s life.  Something as simple as a smile has turned a stranger who was walking down the street away from suicide.  If we could just need to be kind to everyone we meet, that simple act of kindness could save a life.  Be a heart that listens, and throw kindness around like confetti!  Be aware of opportunities around you to be kind.

I love the video called Life Vests Inside – Kindess Boomerang’s – One Day.  You can watch it on “YouTube”.  It starts off with a young boy falling off his skate board.  A man with a orange vest like a road worker helps him up.  Then the boy sees an elderly lady crossing the street and having trouble holding on to her bags of groceries, so he puts down his skate board to help her.  Then the elderly lady sees a young woman trying to find coins for a parking meter and hands her some coins, and it continues on to end back up with the road worker being given a cold glass of water.  What I loved about it is that they included young and elderly; men and women; white, black, brown races; rich business man and homeless man.  Everyone had a chance to both give and receive kindness.

Too often we underestimate the power of a touch, a smile, a kind word, a listening ear, an honest compliment, or the smallest act of caring, all of which have the potential to turn a life around.

The growth comes from really understanding that there can be different perspectives.  From understanding what in another person’s background would create a different belief.  We have this idea that someone has to be wrong and someone has to be right.  We should never judge another’s choices unless we have a thorough understanding of their reasons for making those choices.  That would mean that in almost all cases, there is room in our world for more than one belief.  Obviously we are not talking about harmful conduct.

The analogy of the map and directions fits here.  If you are going to San Fernando Valley from Ventura, you might take the 101 to the valley or you might take the 101 to the 23, which becomes the 118.  Which way you go would depend on where in the valley you were going and what traffic was like.  The 101 tends to be tied up with traffic more often and the 23/118 would probably be faster. again depending on where in the valley you were driving to.  I could argue for one and you could argue for the other.  I could have experienced a faster time one day, and you could have experienced a faster time the other way on a different day.  Depending on the circumstances the wrong or right answer would change.  Most things in life are that way – it all depends on the circumstances around the perspective.

We don’t see things as they are, we see them as we are.

So be kind.  Be compassionate.  Be respectful.  Express your beliefs with grace.  Spread #love, spread #peace.

Your Future Lies In The Beauty Of Your Dreams
Talent Can Happen, Genius (Vocation) Must Happen
Only Those Who Can See The Invisible Can Do The Impossible
The Courage To Continue