To Catch Your Dreams, You Have To Be Brave Enough To Chase Them 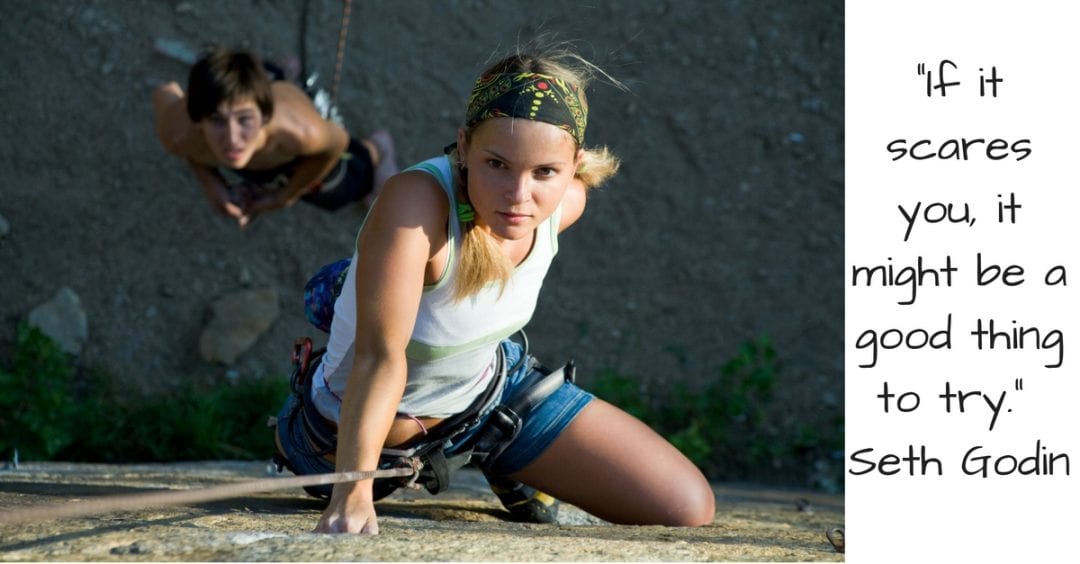 Have you ever heard of the question  – If you could have dinner with anyone dead or alive, who would you want to have to a dinner party?  Eleanor Roosevelt is on my list.  She seems to have been a remarkable woman.  Her advice?

“Do one thing everyday that scares you”  – Eleanor Roosevelt

Do you remember when you were a kid and you got your first bike?  I remember being so excited to be able to ride a bike like all of the bigger kids did.  It was a symbol of growing older.  A lot like getting your drivers license or turning 21, a true milestone.  First though you had to have training wheels. It took a time or two to figure out that they were keeping you from falling, because you had to learn to trust them.  Then came the day that you had probably been whining about, the day they took the training wheels off.  You were ready to balance the bike and ride it all alone.  After a fall or two, you figured out how to balance the bike and from then on you were no longer a baby.

What I remember most, is that even though I was scared of falling and getting hurt, I wanted those training wheels off.  Being accepted into the big kids group was more important than letting the fear stop me.  Always remember that when you are scared, you are thinking about doing something that requires you to be brave.  Riding a bicycle without training wheels for a 5 year old is being very brave.

What is something that you have done this past year that required you to be very brave?  What were the training wheels that you removed, the thing that you were depending on, that you needed to let go, so that you could grow?

When I took my drivers training class, it was part of high school.  The class started right after school, and the first time behind the wheel you had to drive off a side street bordering the high school.  All of your friends would gather around the stop sign, waiting for you to drive the car out of the lot and up to the stop sign on the side road.  Of course, there were several sudden jerking stops as you drove toward the stop sign and all of your friends would laugh.  It was like a hazing in a way, because it eventually happened to everyone you knew.  At some point we would all be the object of ridicule.  But at the same time, it was like – cool, I’m driving a car! 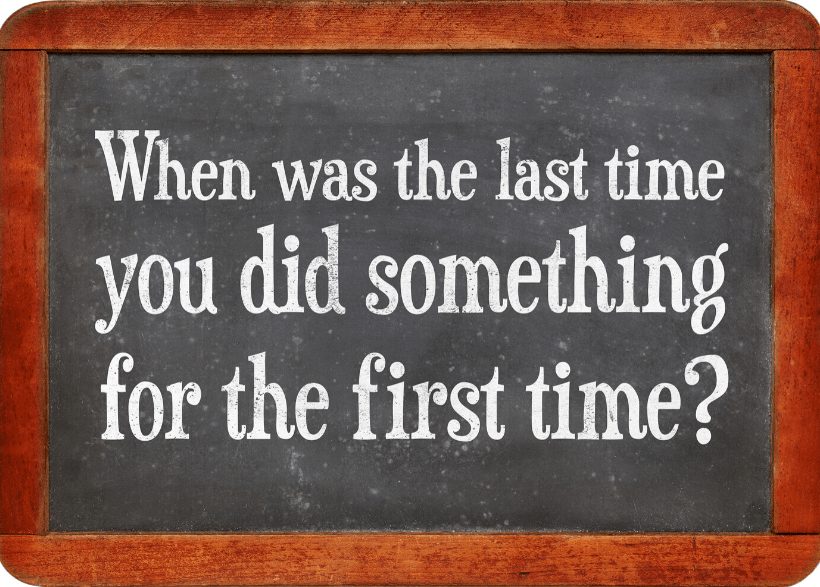 These are the two examples that I keep in my head when I am trying to break through and do something that scares me.  Both of those things scared me, but at the same time, it was cool, look at what I am doing!  It reminds me of the hit song from “Panic At The Disco”, “Hey look ma, I made it”.  It also helps to have mentors like Eleanor Roosevelt.  People that you admire, who you can look to for guidance.   Albert Einstein is another of my dinner party guests.  He said:

“Move out of your comfort zone.  You can only grow if you are willing to feel awkward and uncomfortable when you try something new” – Brian Tracy 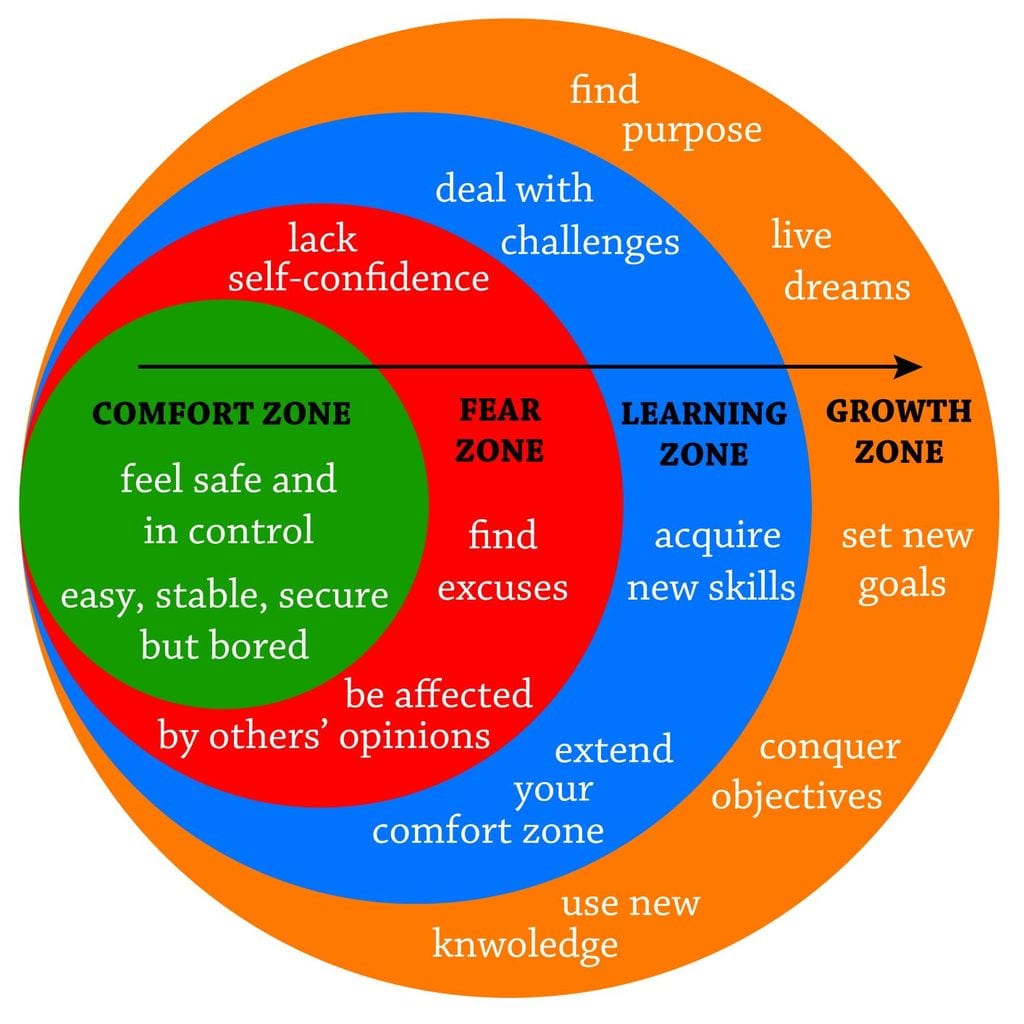 I have really thought about this fear of failure/success.  I love the breakdown of the process in the above picture – that moving out of your comfort zone is actually a process of moving from fear, to learning and then to growth. (note:  the photo is from Adobe and I can’t fix the typo)

Once I move past fear the feeling I have shifts into anticipation.  Like fear, it also begins and ends in the stomach.  Like riding the roller coaster as it climbs up and up to the sky, and then hurtles you down to the earth, whipping you back and forth through the turns.  The wind blowing against you, your stomach lurching up your chest as you hold on tight.  Then all of sudden the ride is over and you are running back to the end of the line to do it again.  This kind of fear is telling you that being scared can be a thrill, because you are learning and extending your comfort zone at the same time.  That what you are about to experience by entering the growth zone is worth breaking through the hesitation and going full out.

“Life is inherently risky.  There is only one big risk you should avoid at all costs, and that is the risk of doing nothing”  – Denis Waitley

They say that at the end of a persons life, what they talk about is the things that they didn’t take the risk and try to do.  Being in love, is one of those risks.  Being afraid of being vulnerable, of being rejected, they hold back the words.  At the end of their life they regret not telling people how they really felt, not saying “I love you” enough to those that mattered to them.  When they had the opportunity, they shrunk back telling themselves, “they know how I feel”.  While that may be true, what any person wants and needs is to hear those words.

So whether it is learning to ride a bike, drive a car, ride a roller coaster or say “I love you” – don’t let fear hold you back.  Be brave.  Say the words, do the deeds.  Feel the fear and do it because it is scary.  Do the things that both excite you and scare you at the same time.  Live your life as fully expressed, as bravely, and as committed as you can.  Just maybe if you can do that, you’ll get more than you ever could have imagined. 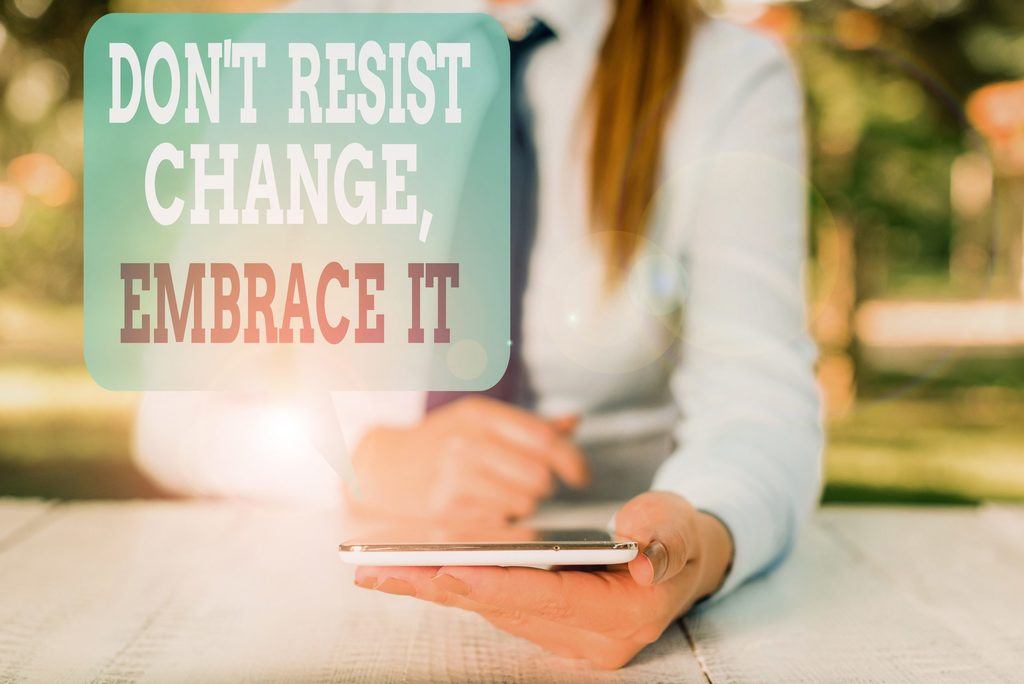