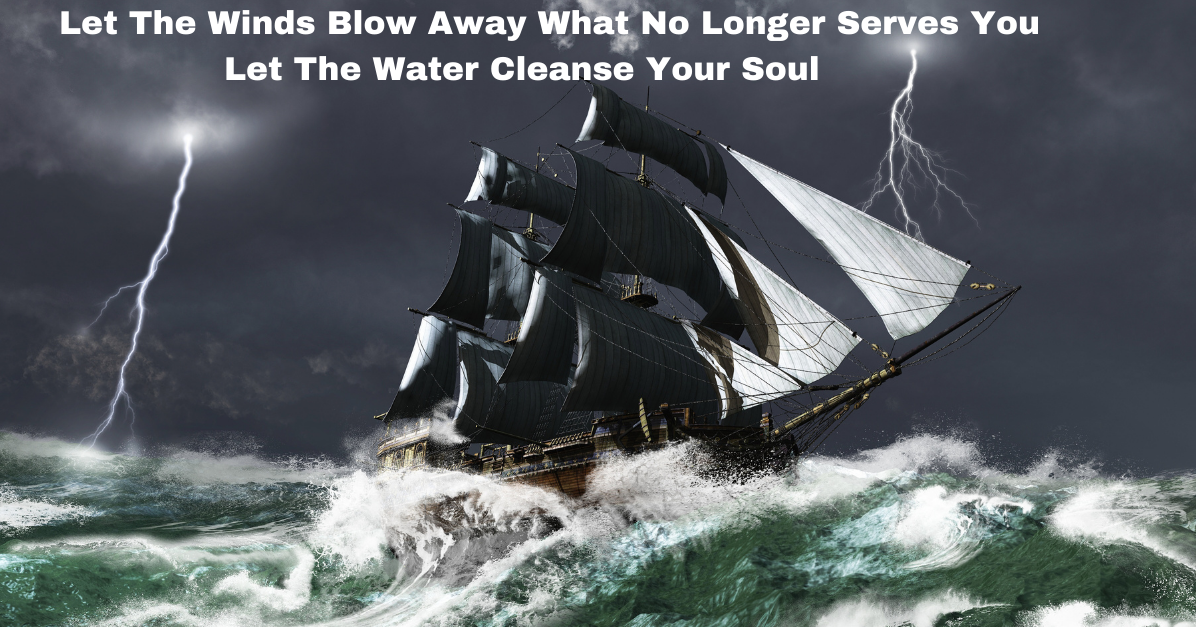 I wrote this poem on a Sunday (see it at the bottom). It had been banging around in my head for a while wanting to be released. So, I took some quiet time while everyone was asleep and let it out. The entire poem is printed at the end of the post.

There is no growth without change. You’ve got to let go of some old stuff. And that can hurt. Often when I’m in the most pain, I realize it’s coming from my trying to control everything. Or resisting the changes that come with the progress. But you see that light . . ., that beautiful next level . . ., and that’s what you have to focus on – Ali Brown

I found the quote by Ali after I wrote the poem and was struck by how much of what I am trying to express in the poem is in her quote. 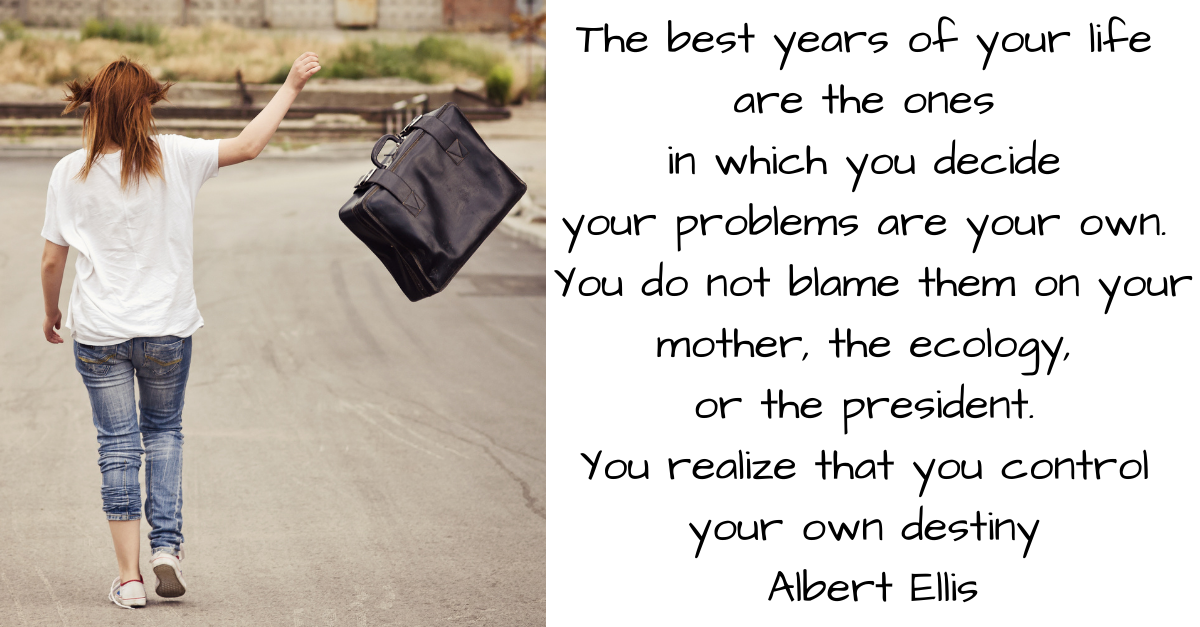 This control is when you stand up on the ship of your own destiny and release the anchor holding you to your stories. You drop the weight that holds you in place. You open to the winds of change.  You drop all of the baggage of blaming the world for where you are at this moment in time.  You decide to take your control back – control of how you think, how you react.

You can’t calm the storm, so stop trying.  What you can do is calm yourself.  The storm will pass – Thimber Hawkeye

It takes a lot of courage to stand up to the storm of fears and doubts. To realize that as you set sail on your ship, that there will be those who you leave behind, because they are still chained to their own stories.

When I thought deeply about this I thought of Pompeii.  The volcano was going to erupt.  It had been giving signs of the coming destruction for months.  The people who were awake and listening, left the island behind.  But so many of the people didn’t believe what they were seeing on a day-to-day basis.  And they left fleeing to safety too late.

I am sure that they fully believed the lies they were telling themselves, the false stories about how safety lay in staying – not in fleeing with nothing to their names, to untold dangers.  No, for them staying was the only smart thing to do.

You, however, face your fears of not knowing how you will steer the ship, or even where the next safe harbor will be.   You have the courage to face the fears of the unknown, to face the lies that you told yourself and make the right decision – to face and live through the changes that are coming. 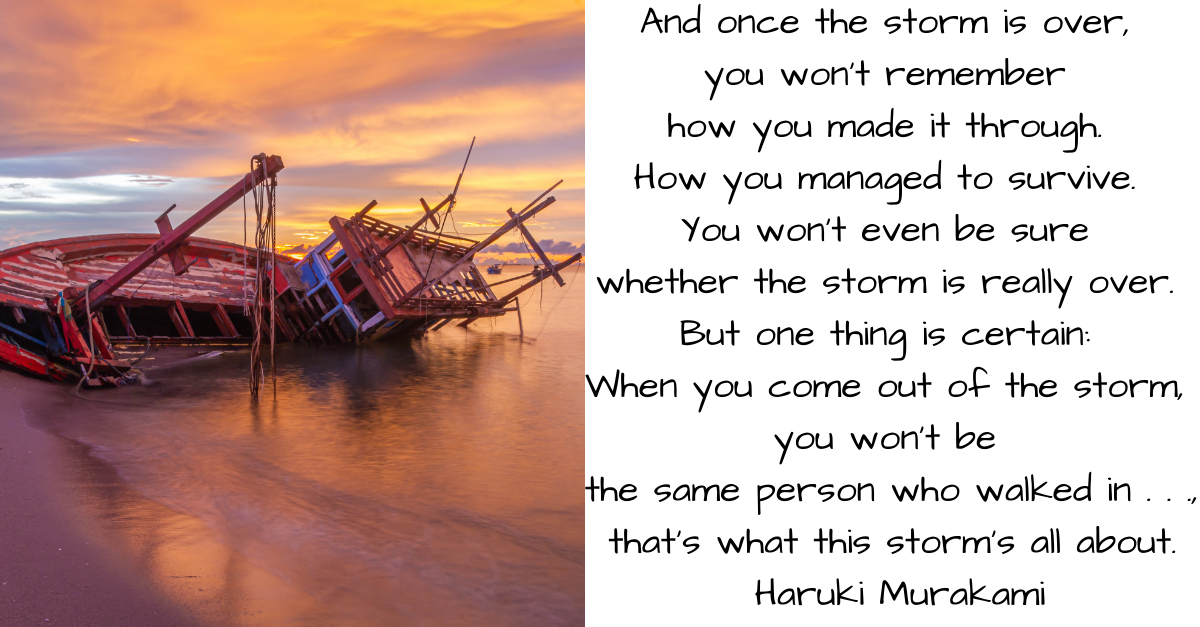 There comes a time when you just have to listen to the music of your soul and set sail to the unknown. And so the journey begins.

Storms without a name whip the seas into a fury, winds screaming through torrents of rain.
Waves crashing against the shore, bring in lost and forgotten debris.
Stand tall on the deck of your ship, as the birds scatter beneath the howling winds,
Let it blow away what no longer serves you.

You feel the backlash of empty words with no truth, the shadows are winning.
No sunlight, every battle lost, and shadow is winning. No rescue.
The lack of love, the hunger for life is insatiable, an open mouth that wails to be fed.
You can’t undo what has been done, it doesn’t serve you.

Thunder rolls and lightning flashes exposing what still needs to be released.
Let it go out the door, don’t run after it as if falls off the deck and into the sea.
Feel the weight of the past, as the sounds of the anchor being lifted vibrate through your body,
The anchor being lifted from the bottom of the sea, the sound of your journey echoing onward.

Bright morning stars, as day breaks open the dawn releasing the light, as it climbs the clear sky,
Light breezes blow as it fills the sails, with the dust blown clear, we see what has been done.
Every color sparkles as it plays upon the sea, as we awaken, transformed once more,
We hear the music of our soul, whispering as the journey begins again, echoing ever onward.