Going Beyond The Possible Is Where Wisdom Is Found 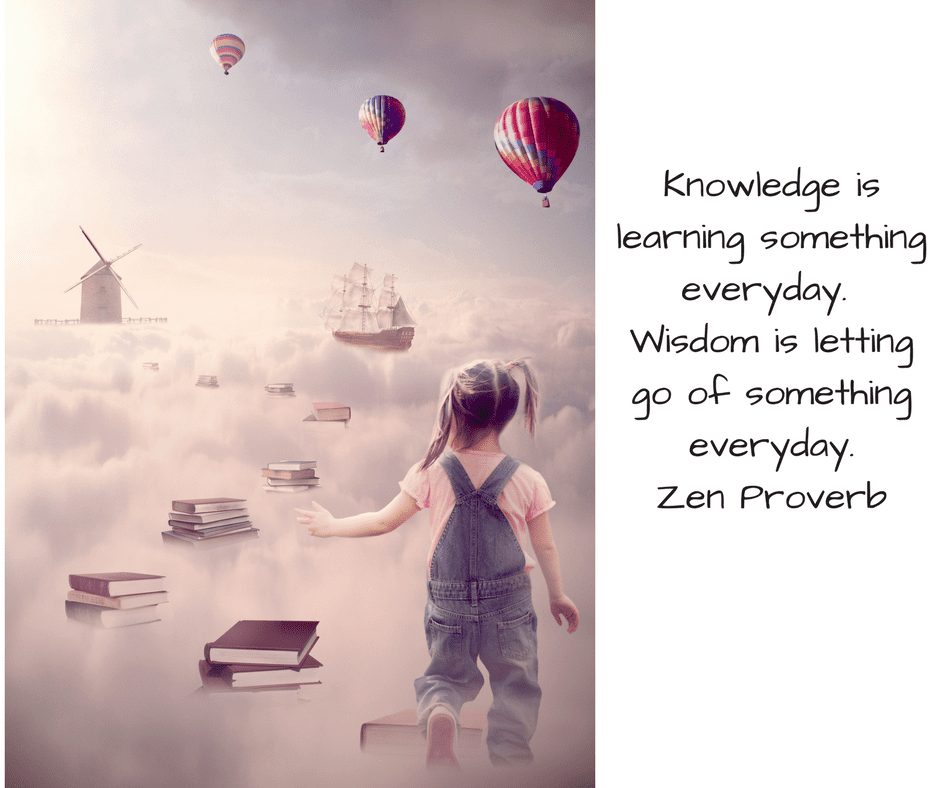 To me knowledge isn’t just about books, school, or job training – places where you learn something new. Sometimes you learn something that seems simple, but on closer examination you see how this one thought changes everything you knew. It turns your world upside down, because you realize that the story that you have been telling yourself was based on bad information.

It is like when you are watching a detective on a TV show solve a murder mystery.  All of the evidence seems to be pointed to the one person. Then they discover one clue and that whole shows shifts as they follow that thread to the real murderer.  Every new thing that we learn is like the thread. Unfortunately in real life, detective’s that refuse to see anything but their initial thought are the ones that put the wrong person in jail.

You need to be open to following the thread, no matter where it leads you.  You need to allow what you think you know for sure, to be flexible enough for you to let go of what no longer fits.  Don’t be like those detective’s that allow their pride, unconscious bias, or prejudices to keep them from catching the real bad guy.  The new information becomes the new belief.

“Knowledge without wisdom is like water in the sand” – Guinean Proverb

I remember that the church I went to when I was a teenager had a rumor going around that one of the women who attended had a new boyfriend. Someone had seen her at a restaurant hugging a strange man, and they had kissed each other. When she was finally asked about it, it took her a minute to realize that they were talking about her meeting her brother. He was passing through town and they met for dinner. The story was wrong. The truth changed the whole dynamic of what was witnessed. This happens in our schools with history, science, etc . .  where the school books become outdated.  New information is discovered that changes the story. 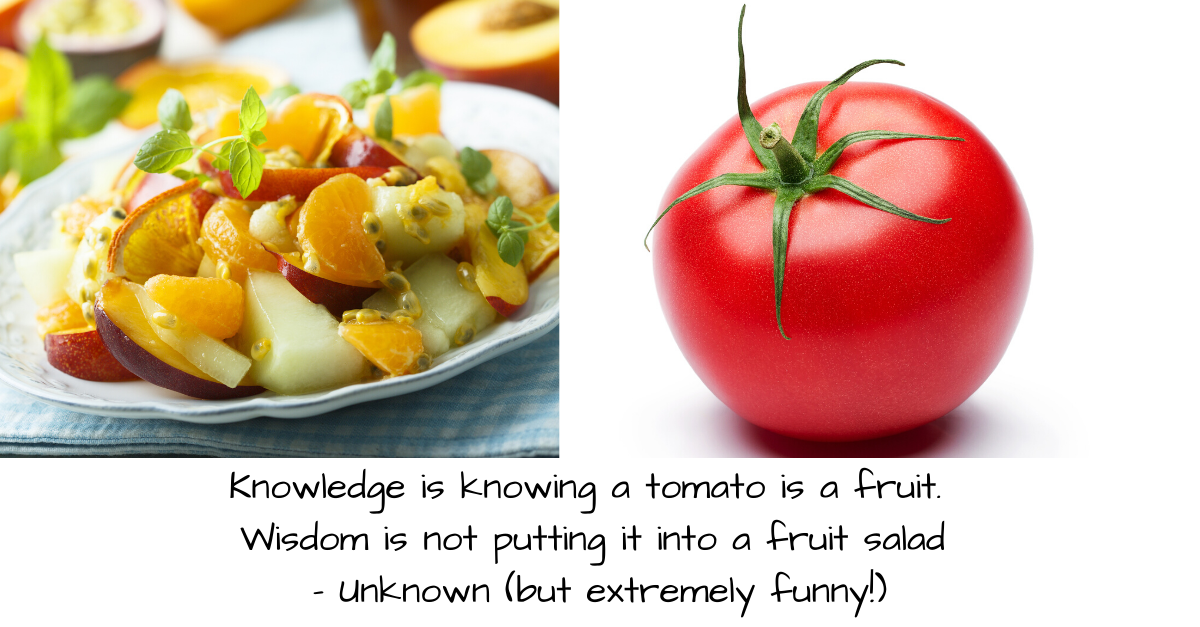 This makes this concept of learning new knowledge, and letting something go make perfect sense. Each new thing that you learn, usually requires an adjustment of your viewpoint or story around something. You take in the new knowledge, getting curious about it, and that is what I think leads to wisdom. Tennyson observed, “knowledge comes, but wisdom lingers”.  It is experience that takes the knowledge to a new level.  And we can only gain experience by either creating some sort of action around it, or watching as someone else creates an action around it.

“Doubt is the key to knowledge” – Proverb

Wisdom to me is more than just an observation. I have always said that I would rather learn from the mistakes of others than make them myself. If I see someone touch a hot stove and get burned, I am determined to make sure that the stove isn’t hot before I touch it. It is a process of following where the knowledge leads. Asking the “why” and the “what if” questions.  Not letting someone inform you that you can’t do it that way.

It involves looking at the way something “has always been done” and saying why?  Is there a way to improve this process or do it differently?  It is all about following multiple pathways to determine the best use of the knowledge.  This is how companies like Uber stepped in and changed an industry.  It is why Richard Branson ended up creating Virgin Airlines.  It is taking existing knowledge and saying, “What else is possible?” and then doing something about it.

They say that you can’t communicate or teach wisdom. I don’t know that I believe that entirely. I think that teaching stories do that if one is listening with an ear to, “how can I apply that in my life” kind of attitude. I agree that many people may not use that filter when they are listening, but that doesn’t mean that they can’t learn to.

There was a kind of fad years ago that started in the religious communities (I think?) where when you were going to make a decision you would ask yourself, “What would Jesus do?”.  I remember this because my son who was in high school at the time and was a real joker, would say “What would  Chuck Norris do?”  It really doesn’t matter who your person is, as long as they have the kind of wisdom that you are trying to incorporate into your life.

If you can find a mentor that you think is a really wise person, (like Jesus) and ask yourself that question before you take action, wisdom will show up in your actions. 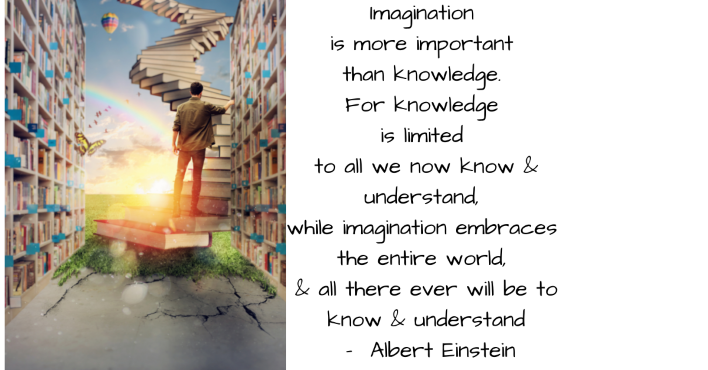 I think that imagination comes into play with Tennyson’s observation that “knowledge comes, but wisdom lingers”. If you take what you now know and play with it down the pathways of imagination, not only will wisdom be revealed, you have the opportunity to increase the knowledge with new discoveries.  This is where I think that some of the modern day inventions came down from the last century.

A writer dreamed up something fantastic for his story line.  Maybe it was Captain Nemo and the submarine and the deep sea divers.  Then a scientist read that story and said, “I think I can invent something like that”.  So they started experimenting and through trial and error came up with something.  It wasn’t yet what he really wanted, but it was a first step.

Other brilliant minds got involved and we ended up with all kinds of inventions for moving through the seas and exploring the deeps.  But it all began in the mind of someone who was using his imagination for a story to tell.

“It’s not what you look at that matters, it’s what you see” –  Henry David Thoreau

So learn something new everyday. Use your imagination, be curious and see what pathways it leads you down. Be adventurous, always seek out the “why”. Miracles will happen if you use your energy to bring your dreams into reality. Live your life fully into the possibilities of “What if?” and “Why not?”. Remember that you are made of stardust and shine brightly.